No this is not a scene in a movie, it is my reality. On Friday night when I was writing the last entry I did, I was eating some peanuts that I got from a store. At that time I was writing on how good the day had been even though I had not gotten any school work done.
Then I felt it, a tingling on my tongue. But I didn’t think that there could be anything wrong. I have been eating peanuts aka groundnut for years. I even made peanut butter and jelly cookies early this year and that was when I discovered the wonders of eating bread with peanut butter and jelly…..so I was positive it was just in my mind.
Click here:

But the tingling won’t stop, I checked my tongue to see if it was swollen. I checked my lips to see if it was swollen too (remember I had a reaction to an orange juice I bought). I know the symptoms of an allergic reaction so I was watching out for the signs. But I was so distraught that I didn’t bring any prednisolone with me (I couldn’t have remembered that because I have never had any cause to use it). I never knew I was allergic to any food. So I decided to google allergic reactions to peanut and see the whole list of symptoms. When I saw that I was not manifesting any of the other symptoms I continued what I doing until my throat started feeling itchy. I then decided to swallow a tablet of Loratidine 10mg.
Even after that I was feeling weird so I took a Strepsil lozenge to soothe my throat. Only for me to start feeling dizzy, my throat was tighten and my chest felt very tight. I knew I was having a reaction then! It was outrageous that it would be peanuts but it was not the time to be arguing over whether it was peanut or not.

I woke up my housemate and told her to call 999 (which is the emergency number). The girl was acting dazed and I had already started calling them. I didn’t even know when the lady at the call centre started talking, I thought it was an automated voice.

I explained everything to her and she asked if I was allergic to peanuts and I said no. To cut a long story that I can’t fully remember short, she asked for my address and post code and told me to not swallow anything and leave the door open.

All that was in my head was ‘I cannot come and die here o’ and ‘I don’t want to go to the ER unit’. I started coughing to try and force my lungs to loosen up. I tried calling a doctor friend who is a classmate to know if there was any other thing to do before the paramedics came but he was not responding.

The paramedics arrived and questions were asked but I noticed (and they did too) that I was gradually stabilising. I could talk and not feel out of breath more. They asked me if I had any antihistamine in the house, I told them yes and that I had already taken it. And we all concluded that the antihistamine (the Loratidine) I took had started taking effect.

Well, they had to do routine test on me…....blood pressure which was way higher than my normal (I panicked but she reminded me that due to what I had just passed through it was expected), she checked my lungs with a stethoscope, my oxygen level , my temperature and also my blood glucose.
The paramedics were around for almost one hour and soon all sort of topics came up….from them yabbing the quality of infra red thermometer that was given to them, to them teasing medics in over thinking/overreacting when any small thing happens to us, to them teasing my housemate that she looks scared and confused, to asking me why I am just doing my masters at my age, to teasing themselves that they don’t take any multivitamins except if beer has vitamins and also saying that I would have to correct my prolactinaemia soon if I meet a British bloke now…….lol. It was a funny night. They asked questions as is to be expected for the medical case reports and said if there is any more issue we should just call (which I rebuked…..I won’t have any more issues).

I am not allergic to peanuts!! I have to say this because everyone keeps asking that when I tell them. Only my brother called me ‘Longthroat’ (greedy). He said why didn’t I eat ordinary peanuts instead of looking for spiced peanuts. 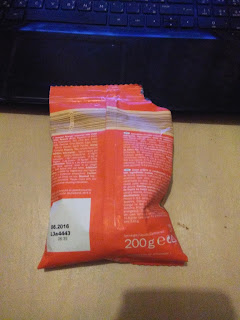 Apparently I am allergic to one of the ingredient used to spice it and after eliminating all the other ingredients that I have been exposed to previously, I was left with ACETIC ACID. It is apparently a food preservative and when I checked side effects of it, I noticed that all the symptoms I had were the side effects for it.

The paramedics (they were two: a male and a female) warned me to stay away from snickers which I won’t  because I love snickers and I am not allergic to peanuts. But I am going to be careful when buying snacks or any food items and be on the look out for acetic acid. I would also take a tablet of loratidine before I try any new product in this place. I don’t understand all the extras they place in and on foods here...…. #confusedmuch #keepitplainandsimple
Anyway I am really grateful to God that I didn’t have to be wheeled off to the ER unit and I am back to my normal (and hopefully better self). The paramedics were awesome. And the response time was long to me at that time but I guess it wasn’t that long (about 10 minutes….i am not sure). Whether It was long or not, it is still better than Nigeria where paramedics/ambulances are non-existent!! God help Nigeria!! I am not even going to say more than that!....#pissedmood

I have to go now. Thanks for stopping by….