REALISING THAT ALL THINGS WORK TOGETHER FOR MY GOOD 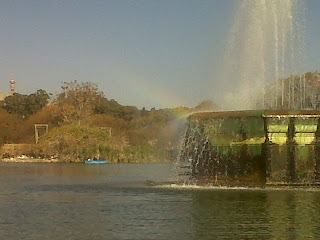 So I went to a church and saw that my former friend was also in the church again (why must i always seat behind him?) and it made me remember when he once said that he wanted to leave his present church and go back to this church so in my 'trying to be civil' manner, I sent him a message saying that it is a good thing he has taken the step that he had wanted knowing how he was in turmoil about taking the step.

And that is when he made a big mistake! A simple thank you would have been fine but he decided to say some things that I am not going to post. I was shocked and mad at first but after talking to a friend I came to realize that I had no reason to be mad. Honestly I really don’t think I am mad. After realising that I decided to have fun. You know how na, by irritating the heck out of him! And the best part of him using his hand to type the things he wrote was that he gave me the inspiration for this post.
I have not seen him for a while and the couple of times I saw him, I practically did a 'u turn' and walked away. At the point I de-friended him, I vowed not to say a word to him but thinking about it later on, I decided that for me not to have to explain what had happened between us I would have to at least say “hi” when I see him on the pathway as against knocking him down on his ass as i originally planned (as if I can…….haha). So for me to smoothen the way so that I don’t revert to my original plan, I have sent about 4 small messages since we separated.

But apparently to him, I was trying to find a way for us to relate back with small talk (God only knows what he meant by that cos since i am not a psychic  i don't know what he feeling or even what it means). But in my true drama queen style (yes, Fatima I saw your post) I had sent over 5 messages that were not coated with sugar and was getting angry before my friend asked me why i was getting angry and for the life of me I couldn’t state one reason. Apparently it was like a bad habit that when you have tried to stop and think you have gotten rid of it, it crops up at the slightest provocation. I was so used to getting mad and fighting with him that when he started typing, i got angry......me and all my drama sha, lol.

I realized that I was no more the person he knew. Apparently I had matured some more within the time we were not friends (this is getting scary, I am maturing…..arggggghhhhhhh. I am just kidding guys……lol). I have found that everything that had happened was for my own good. I think i realized that when something happened last month and all I could say to God was ‘you really do know what you are doing’.

The fact that we were friends and no more friends was and is for a very good reason. And that reason is only known to God, me, myself and I alone…sorry i am not saying this one. It is amazing how things work together for my good. After I realised that I had no reason to be angry and I realised I was not angry, I did what any mischievous person would do. I started stroking the fire. I replied very well just to irritate and annoy the crap out of him. I know, I know, I am a bad girl (coveringmyeyes) but I was feeling bored and uninspired and my eyes are really hurting but I was not sleepy so I decided to continue yapping and making him yap. It was just perfect for me.

He said he was hurt by the previous post I wrote (if you didn’t read it previously, click here) and that the last message I sent reminded him of the hurt. Well, like I told him, I am sorry that what I wrote hurt him but I am not sorry for what I felt. I was hurt and saddened at that time and really confused because what happened was relatively new to me but now I am so super grateful for all what happened. I really learnt a whole lot and I think it has helped me in other things that have occurred lately in my life.

After that period I learnt that you lose some, you win some. I was spiraling into a place that was not good for me at that time. Now I know the signs and once such things happen for the sake of not de-friending another friend or going back to that place I just back off a bit and let things cool off. It is not healthy to be bickering (like he just said we were doing…..i didn’t know I bicker o but he said it) every blessed day. Or to be made to feel like you didn’t matter but hey, people act in different ways. That is what makes the world a very interesting place. Imagine if everyone was like me…..yikes!

Anywhoo just thought I would turn what would have been a nasty situation into a wonderful one. I had a nice time laughing at myself this night. Hey, you learn to roll with the punches and live life to the fullest.

Hey doc, I didn’t diss you a lot as I said I would. Hopefully you like this post. I have decided that some things ain’t worth too much drama. I have moved on and don’t feel like coming back. It was not really a nice place for me. So when I see you in the consulting room or on the walk way I would try not to shove you on your ass and fake a big smile and a bigger HELLO (in my baby voice) and let the whole world know I am fine with everything. But note this, you say something that gets me really mad and I might chop off your legs…..i am kidding o! Hahaha…..i am a lover not a fighter.

Enough said, I am off to bed. And hope I didn’t make you check out my blog (like I was just told) but you read it because you just want to know what mischief I have been up to. I promise I would be a good girl tomorrow. I have to be, I am getting my afro flattened out. Betty (my hair) is getting a creamy crack application. I am so nervous. I was supposed to get my camera today and then take pictures with it tomorrow but since it didn’t arrive today, I have no choice but to go ahead with my plans without it. Oh well, life goes on. Hope my phone pictures would be good enough.

Till tomorrow guys, I can’t wait to see my hair length….yay!! Thanks for stopping by.