Saw this a few days ago on dailymail.co.uk and i thought it would interesting to hear your comments. Be prepared to be wowed...Enjoy

The rich guys of Instagram show off their 'ultimate status symbols' ... big cats: How mega-wealthy Arab men are accessorising their supercars and powerboats with lions and cheetahs

For mega-wealthy young men of the Gulf Arab states nothing says 'I am rich' more aptly than to Instagram yourself and your lion or cheetah posing alongside your Mercedes or Lamborghini or motoring along in a speedboat.
Showing off the Persian Gulf's latest 'ultimate status symbol', the penchant for posting big cat photos on Instagram betrays the young men's sheer bravado or stupidity, depending on your point of view.

Indeed, while the intimacy on display the owners seem to share with their cats is clearly touching, others could possibly think of better ways to flaunt their wealth than sharing feeding time or bathing with fully grown 400 pound lions. 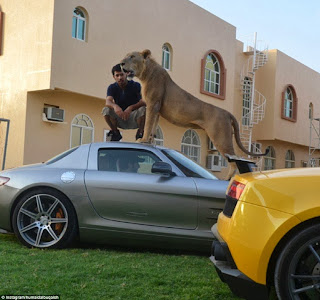 Eagerly followed by over 250,000 followers on the popular photo-sharing website, Humaid AlBuQaish, has become cult viewing as he regularly posts himself and his big cats online.

While it is not entirely clear what AlBuQaish does for a living or how he accumulated his fabulous wealth and pets, it is clear that he lives a life of luxury that most can only dream of.
Trusting his cats implicitly, AlBuQaish is pictured feeding his menagerie of lethal predators and wrestling with them - all the while showing off the fact that he owns such magnificent creatures. 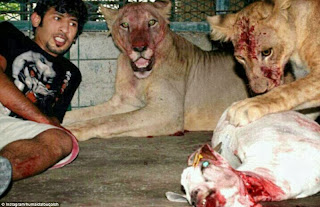 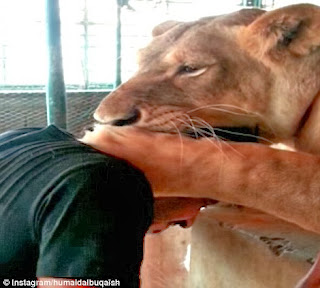 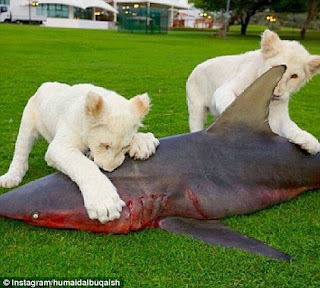 Engaging in one-upmanship online, others have posted pictures of their big cats being taken for a spin in a speedboat - while others are happy to place their heads into their prized possession's mouth.

The trade in big cats in the Gulf reflects how status among the wealthy is all important, where a rare white lion will sell for around $50,000.

Jasim Ali runs the Ras Al Khaimah Wildlife Park in the United Arab Emirates and he adopts and cares for those animals that are discarded once they become too large and dangerous for their boastful owners.

'If someone buys a very expensive animal, he is boasting that he has enough money to get anything he wants,' he said to CNN. 'If he has a tamed wild animal like a lion, he is trying to show off that he is brave. But this is not courage; this is animal rights abuse.'

Of course there is nothing to suggest that any of those in these pictures would openly flaunt ownership of illegal animals so publicly online.
However, the problem is such that in 2010 over 200 illegal animals were confiscated in the United Arab Emirates in 2010.
Among the animals taken into custody are white lions, tigers, panthers and cheetahs as well as hyenas. 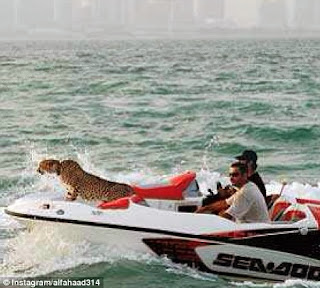 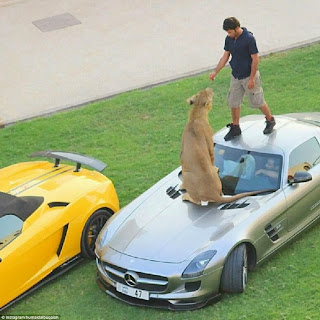 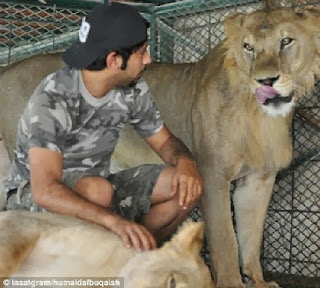 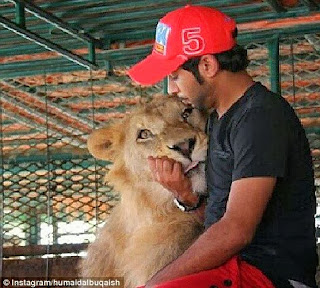 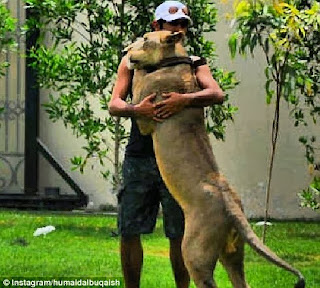 What do you guys think? As for me, this is serious rough play o. Ordinary dog i dey run, na Lion and Cheetah i go near. Mba!! I think not. The day the animals would remember who they are, Only God would help them. Me i pass o, i no want.