I write this post with great shame in my heart. My eyes are covered and my head bowed down. Today is the beginning of Shiloh (a programme of Winners’ Chapel) and i really wanted to attend.  As i am an Anglican and don't know much of their church activities, i thought the programme would start by 5pm like how their other evening programmes start but I apparently didn’t know that it was to start later. After staying there for over 1 hour and not seeing any sign of them starting, I had to leave. I had not planned to stay beyond 7:10pm (which when their other programmes end). It was when I was leaving that I remembered that a long time ago someone that used to attend the church complaining of church during a service closing at 11pm, I think it was a Shiloh service (i am not sure).

Anyways my shame is that I had to leave before the programme started and I am not able to attend today’s service but the truth is I didn’t know it was going to be a late programme. I don’t know how I would attend the other days but I would work something out as I don’t usually stay out late in the night. The only time I stay out late is on new year’s eve service (Passover night) when I would arrive back home at 1am or 2am. We would see how tomorrow goes. That means I might not be able to write for a while.

As I was coming back it was dark already, I decided to at least use the opportunity to take a few pictures of the decorations on the street light. I think I need to learn how to use this camera o, I was taking series of shots that were not it at all. Anyways, here is the good and bad of the pictures (hopefully you would concentrate on the good….lol) 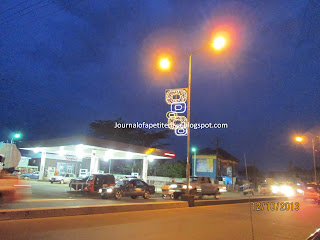 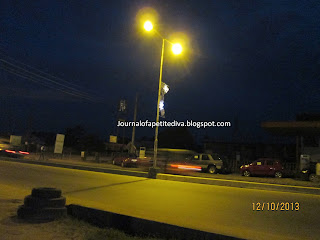 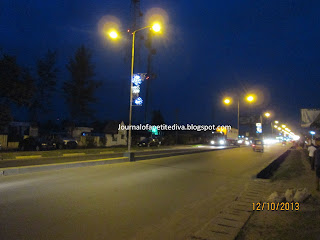 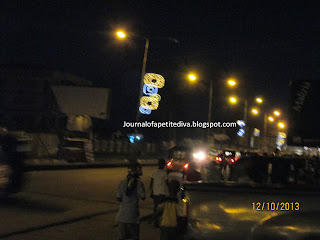 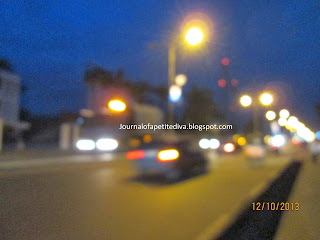 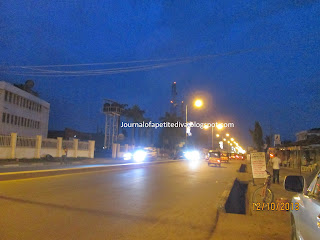 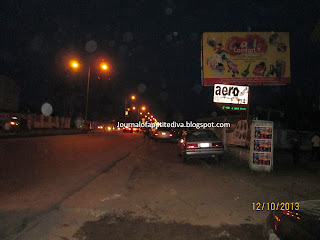 Guess what else I was able to do? I was able to buy suya…..*dancing* And before y’all crucify me, let me tell you that I don’t think I have eaten suya since April or May, not sure exactly but I am sure that I have not eaten suya since I went on leave which was in July. Anyways, the suya guy or spot is infront of a drinking/relaxation joint and here is what they placed as their weekly activities…

*Lipssealed* Drinking places like this are really plenty in Uyo/Akwa Ibom (maybe not with that weekly activities though). And before any Akwa ibomite accuses me of being a Tribalistic Diva (someone has said that before), you have to admit that I am right. These places make some serious money! And it is because of these kind of places that the cinema is not thriving as well as other cinemas in other states.

Before the cinema tickets were slashed to 100-350 naira, people rarely went there. I used to go once a week and when I went, the people you see were probably less than 50 and you would find out that 70% of them were not Akwa Ibomites and the rest were Akwa Ibomites that have lived in other states. No joke o! Someone said that (and I am quoting an Akwa Ibomite) ‘a typical Akwa Ibomite would rather spend his 1000naira on drinks than spend it on watching a movie that he can buy on a 200naira DVD and watch at home’. That statement says it all.

Well guys, that is all for now. I need to run, I am going to eat my suya with my Ijebu garri….whoop! whoop!!...lol. I know, I know, I am a crazy girl but that is why you all love me.

Thanks for stopping by…