Shippyme, a sister company of Circuit Atlantic Limited is a company that is designed to help Nigerians shop online in stores (majorly U.S) or sites that do not ship directly to Nigeria. It provides you with a U.S address that you can enter on the sites and then the company sends it to you here in Nigeria. They are sort of like a friend in the U.S that helps you keep your purchases and sends it to you at your new place/address (which happens to be here in Nigeria).

I found out that there are a lot of companies who provide such services but they are mostly foreign owned. Those companies however seem to have a wider target than Shippyme and have a restricted range of shipping companies that they use.

1.     I like the fact that they are Nigerian owned and Nigerian based. When I was having the problem with them, I was comforted by the fact that I could go to their office and take a couple of officers and get my packages BY FORCE! I know that might have seemed extreme but I was tired and angry and knew I needed to do something.
2.     Their prices seemed a little bit cheap. For a 1 pound (0.45kg) package It would cost $5.5 with some extra for insurance and shipping within Nigeria, a 1 pound package cost me about $18.38 (N2995.13). It seemed ridiculous at that time because what I was shipping was just about 5dollars. However when I checked a lot of foreign based companies offering such services, the least I could get was about 30 dollars. That is just insane.
3.     They have the option of office pick up and door to door delivery.
4.     They have package consolidation option though I didn’t use it because it seemed to cost more but they say it would have saved me more money, how? I have no idea.
5.   I like the fact that all my items arrived in perfect condition. No breakage and nothing was stolen. All the invoices were also intact.

CONS: Oooooh Boy! They are quite a lot.

1.     I didn’t like the way my case was handled at all. The staff members seemed confused. They couldn’t get their act together. From the day I wanted to pay, I knew something was off. I went to Zenith Bank to pay and like I always do, i went to confirm the account details only to be told that the account name was wrong. Fortunately for me, the customer service told be the right name (which was their sister company’s name that i had used before so i knew it was okay to pay) after I showed her the mail I was sent with the account name and 3 different account numbers of 3 different banks.
2.     The billing process has to be seriously reviewed. After paying for my packages to be shipped, I noticed that I was been over billed for some things and  I was been billed twice for the same item. I let them know and I was assured that it would be looked at. The bill was reviewed and I am still waiting for a refund. If I don’t get one soon I might cause a fuss, true diva style....lol. I ain’t plucking money from trees!
3.     Their customer service sucks like heck! The email correspondence is poor! No, it is non-existent! They rarely reply your mails and when they do, they can’t give you the right or proper answer. It apparently seemed that the only way people were getting answers was when you left a comment on their testimonial page of their website. Just received a call from the ‘President’ of the company himself and it was because I wrote a comment (not a glowing one and stating that I would never use their company again). He called to confirm if I had received my package and I should kindly update that I have received it. Which I have done but I wrote an honest review (it might not be exactly what he expects but sorry, I just can’t lie).
4.     The packages took too long to arrive! It took almost more than 2 weeks to arrive. I paid exactly on the 11th of June and my packages reached me on the 4th of July. I think all my packages arrived at their office on the 14th of June. For the other companies, it would arrive about 2-4 days after it has arrived at their offices but they are too expensive. I ordered goods almost 11kg (about 22 pounds) and it would have cost almost 200 dollars to ship it here while with shippyme it should have cost me technically 120 dollars (though I paid more than that, still waiting for my refund).
5.     They need to be coordinated. I can’t call one person today, be given an answer then call tomorrow and be given another answer. They need to be in sync and be truthful. The excuses really pissed me off. I am trying to understand them and cut them slack after the president called me but he needs to get his staff members in line.I was even given 2 different waybill numbers when they shipped my packages! I got so pissed that I started recording the calls I made to them so that if I had to go to their office in Lagos and I am told crap, I would use the recordings against them.
6.     I didn’t like the fact that I had to disturb God because of them (don’t laugh guys). It was not funny! I work hard for my money and I didn’t like the fact that I felt like they wanted to pull a fast one on me.

Well, in all after calmly thinking about the whole situation I think I might try them again but maybe after about 6 months (or if I don’t find a cheaper and better alternative). Would I recommend trying them now? I would say do your own research and then decide for yourself whether you think it is worth it.

I am sorry folks about the long post but you all know how I like to write lengthy posts when I am passionate about something (My bad, that means sorry).  And I really wanted to tell you guys about my experience with Shippyme.

Oh! Here is a picture of my packages when they arrived #dancing (they have been opened and I can’t wait to use them). I basically got things for my hair and body. I am especially proud of the fact that I got a sunscreen (at last!#rollingmyeyes) and I can block out the U.V rays of the sun from harming my skin. 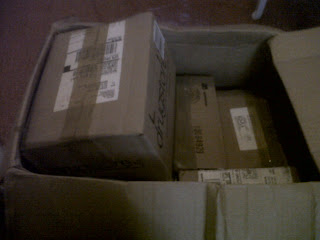 Gotta run, I have a long day ahead of me tomorrow. I do my last call for the month tomorrow.

P.S: About 2 days ago, a lovely make up artist called Ewar Make over(Adenike Ogungbe) died after childbirth. It is so sad. I am literally scared of childbirth. She was so talented. May her soul rest in perfect peace, Amen.
Written by Petite Diva at 2:51 PM