CHILD BRIDES IN NIGERIA ARE A NO-NO!!! 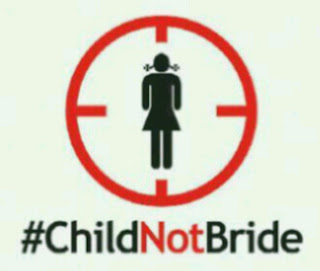 For those who are not from Nigeria, you might know that some senators (cough…IDIOTS!! *smile) have decided that a female of more than 18years is not old enough for them to take as a wife, they now want to snatch the childhood of some girls.

I am so livid right now. Most of the idiots (I ain’t coughing anymore) are so useless! I can’t believe people voted them in. I am seriously wondering if there were no female senators there when they were voting about this. How can you stay there and want to rob the future of some girls? It is not fair! It is not right!! This ain’t animal farm!! You ain’t higher than anyone!! You are there to serve and steer this country in the right direction not bring us backwards. I am sure they won’t think like cows if they were females. I cannot believe that in the year 2013, some men that should have more brains than a cow are descending so low.

Fortunately most people are saying no to this barbaric decision. I have faith that when Nigerians get together we can drown this stupid rule. People are signing petitions all over the country and I wish I could sign up too. A friend of mine said she didn’t sign the petition because it is not specifying what age the limit should be. That she is a supporter of early marriage not underage marriage. For the love of God, early marriage is different from underage marriage.  Marrying at age 10 is cruel. I believe if the legal age for voting is 18, then the minimum age should be 18 and I think it is what everyone is supporting. A girl should marry as an adult not a child!! As a child she should be playing with a teddy bear or a doll not her child!! #angryface. I can just imagine if I was given out as a bride when I was a child. This is just mean!!…Arggggghhhhhhh!!

Someone also said that some people in the west (because the decision originated from a northern senator that I won’t tell you what I think of him cos I am so angry right now) are getting pregnant at a very young age. And to that I say BULL***T!! It is their choice to get pregnant! It is different from being forced!! You can’t compare the two, at all.

As human beings we have a right to choose. The right to choose is what makes us different from animals. If they chose to get pregnant at a young age due to some wrong information then it is unfortunate but to make underage marriage legal is just off, way off!! It is a different ball game.

A lot of people have rained curses on the senators and I know that some would soon manifest in their lives. I am also confident that the senators (all of them) would have to reverse their decisions because Nigerians can be ruthless when we come together and this is bringing us together. And we would achieve this! I know my future girls would never, ever be a child bride but I am fighting for their friends and all girls in my beautiful country!

I might not be able to march or was not able to sign the petition but I am determined to do all I can to show my support for the reversion of the rule and my disgust for underage marriage. And I am not talking from both sides of my mouth; I am clearly saying NO TO CHILD BRIDES! #Childnotbride

Well, that is all for now. Actually that is all for a long while. I am going to be absent for a while. I would miss writing and you guys but I know that when I come back I would be back better than ever. #kisses guys……

Luv ya,
Petite Diva.
Written by Petite Diva at 1:52 PM