MUCH ADO ABOUT MY REVIEW ON SHIPPYME 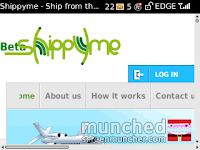 I recently posted a review on a company called shippyme (if you missed it, you can view it here ) and someone did a review on my post. It was brought to my notice some of the flaws that might have been in my post.

First of all, I won’t change my review it is what I felt and still feel. Then secondly, if you are new to my blog then you might not understand what it is about. I blog about my feelings, thoughts, adventures and generally anything I think can make a good post. I blog like I am talking to a friend (most of the times) and I wrote that post like I was gisting with a friend.

Then for those who don’t know me, I am someone who when I am passionate about something I go off like a cannon ball. Full speed ahead! And the review I gave was done a day after I received my package. After almost 30 days of associating with the company, I guess I was not in a great mood to calm down. And the fact that i am still waiting for a refund is discouraging. Nobody seems to be talking to me about that.

However after writing my review, a friend of mine shared my blog post link and wrote that I wrote a proper review of the company and agreed that it is normal for a company to have hitches. That made me to surf the net for other reviews and I found out that my review was actually a proper review (i am pleased with myself...lol). Then I also came across a post of a customer on a forum who said that he placed an order with amazon.com on the 16th of June and received his order her around 1st of July. Considering that it takes a while for amazon.com to ship their items to the U.S address, the amount of time it took for the order to arrive was not that bad.

Then it was also brought to my notice that I might have unknowingly influenced you guys to steer clear from the company. I don't think that i am that influential, i was just writing what i felt and you all have the option of doing your own research and deciding what you want to do. A girl friend said I should chill and try to understand that it is a new company and they are bound to have faults for now. I guess I am used to the fact that pharmacy doesn’t really allow for faults or mistakes. It is said a doctor can only kill one person at a time but a pharmacist can kill thousands even millions at a time so we are practically not given any allowances for mistakes (like we are super humans or something #rollingmyeyes). So I guess I expect too much at times, I am sorry for that.

However the fact is if a friend asked me if she should try to use the company right now, considering I am a sucker for trying new things and giving people a second chance I would say she can but, a big BUT, I would advise to try with a very small item say a lip gloss or items worth less than 25 dollars (less than 3200 naira) so if the glitches have not been resolved she doesn’t really lose a lot. I guess that was what I should have done originally but like I said I had used their sister company so I didn’t expect all the glitches.

However as it has been claimed that all the problems have been resolved, I would definitely try using shippyme again so that I can give you guys an updated review of the company. But it won’t be right now because I am officially on leave!! Whoop! Whoop!! #Dancing. It would be nice having a little rest. I intend to do something major during my leave so I won’t have any extra money or time to try shippyme again but when I am back I would be sure to try it again after i have received my refund and only after i have received my refund. I have seen some things that I want to get (God help me and my spending habits! I need an accountant or someone who can teach me a way to manage my finances) that I might get. However i would take baby steps now.

Well, that is all for now. Would someone please beg me to stop eating peanuts (groundnuts)? An intern bought a bottle for me and I have not stopped eating it since and it is not good for me considering I get acne/zits/pimples like crazy and I have a super oily face…..#crying. You guys should beg me to stop o……lol. After I finish the bottle sha.  Groundnut and garri, hmmm….nice, lol.

Luv ya guys and thanks for reading my post,
Petite Diva
Written by Petite Diva at 7:52 AM