IS THE 'NO WORK NO PAY' POLICY BEING IMPEMENTED WITH THE DOCTORS? 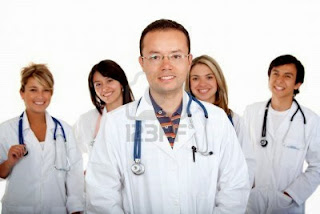 About a couple of days ago, we were paid a whole earlier than normal because of the Sallah celebrations and unknown to me, the doctors were not paid. I just happened to know that they were not paid when I told a doctor friend about something that happened to my salary. He was shocked that we had been paid and we later found out that all of them had not been paid.

I immediately thought that they probably were not paid because they were on strike and federal government has decided to implement the ‘no work no pay’ policy. I felt that their consultants who were working would have been paid but only for me to find out that no doctor has been paid, not even the consultants. This has led me to foresee serious problems within the next few days. There is going to be a nationwide strike of alllllll doctors, I mean all doctors even in the state hospitals.

And that would be a major disaster. I don’t know what my president is up to but all of them (including the doctors) need to get their shit together (pardon my French). My only explanation for the non-payment is that since I supposedly heard that they said they do not want to paid through the IPPIS programme again that the managers of the IPPIS  decided to exclude them from the payment and they would receive their salary at the end of the month as usual. I don’t know if I am right but that is all I can think of because I refuse to believe that the government would intentionally withhold their salary (even that of the consultants who have been working through this strike) because of the strike. That means they have not paid their house officers (who like our own interns have not been paid for 3 months), the junior registrars, senior registrars and the consultants this month.  Wahala go dey o! They that can fight for anything.

I don’t support withholding the salaries of the house officers and the consultants but for the others, my lips are sealed. I refuse to say a word! I was letting a doctor friend know that our interns have not been paid for 3 months and because of that we cannot get new interns and he mentioned that we should join them in the strike and I said NO! THANK YOU. I let him know that we cannot support a strike that is meant to better them alone. You are talking about foreign exchange programs and remunerations, yet you always get something whenever you go for trainings or lectures or programmes, we (pharmacy) don’t get anything (oh yeah, i was told we probably don't get anything because we don't have a strong association to fight). I have been to Lagos twice this year for my update course and I have not gotten one kobo back. And if anybody says otherwise, i would give concrete examples. In case you forget a lot of pharmacists are married to doctors. I have made up my mind that since i am doing my program for myself i don't care if i get paid or not or if they get paid every time, it is of no use to me anymore. God would provide and i won't beg for money.

And after obtaining a fellowship the ideal thing is that the pharmacist should be paid a certain allowance, federal government apparently approved it but some committee of 'some powers that be' decided that they were not going to give it to the people that were due for it. I wonder what is going on, hmmm?

Even the generated revolving funds that we get through the sales of the drugs is been commandeered by some powers that be who are not staff member of the pharmacy department in almost all the hospitals and spent on things that are not pharmacy related. Buses are donated to pharmacy and yet we would have to beg to use it and yet someone expects us to join in the strike for you to get more money for yourself. I absolutely think not! If anyone has the right to speak because of unfair treatment it should be us! However i have made up my mind not to look at all these things anymore because i know where i am headed to and i have decided to focus on that. However even if anybody declares that we should go on strike to join ARD, I personally won’t join. I have decided to stand for the right thing even if I am the only one standing.

If the strike was for non-payment of interns then I think within some days of the start of the strike, pharmacists and laboratory scientists and others affected would have joined and we would have tackled the government by now. I don’t understand the government anymore, is it that they don't want interns anymore? If that is so then I hope they know that you cannot have a qualified pharmacist or doctor or lab scientist without the compulsory 1 year internship training? If they don’t want interns anymore in the hospitals, then they should be prepared for hospitals to crash and they would be greatly affected.

Oh well, I would watch how the drama unfolds because I know that tomorrow there would be no single doctor in that hospital. I should remember to take a few books to read because we are going to have such a long day.

That is all folks. I am tired. I went to check out the products that a client had so that I could give her the bill for her hair products and I went to treat one of my experiment’s hair. I have just touched her hair twice and she has seen tremendous results. I would write a post on it (probably tomorrow) and upload pictures to show the incredible reduction of breakage we saw. It is outstanding.

Thanks for reading.
Luv ya,
Petite Diva.

P.S: I am still waiting for my 5th booking and client. Don’t you want to rock your hair instead of hiding it under a wig all the time?
Written by Petite Diva at 2:26 PM