ILEYA! ILEYA!! ILEYA!!! *Dancing… Ileya (that is how Eid el Kabir is referred to in my language) is here again. It is the time for eating plenty meat and enjoying with our muslim peeps. Happy Eid el Kabir guys..

However as of now I have not received any meat (how I want to get the meat in uyo, I don’t know o) and my family has not received any meat too…..lol. But seriously ileya doesn’t mean the same thing to me anymore. Growing up, ileya used to be fun. Neighbors would give out meat either cooked or raw and food to people. My family members that are Muslims would make sure that meat gets to us any which way. And my mum would have not bought any meat before that day because we were sure to get meat (even if it was only from my grandfather or my grand aunt).  We would also be taken by my dad to a friend of his who always did ileya party and invited friends and family.

However that is no more. My grandfather and grand aunt are no more and people are no more neighborly again. A pharmaceutical rep and I were just discussing that ileya is no more the same. People seem unfriendly with each other. It could also be because of the economic situation that people are not giving again during ileya but I however don’t think so. We were discussing about how during ileya, people would give meat and food to everyone and during Christmas, Christians would give food to everyone and if they have a party invite everyone (both Christians and Muslims) and we would just have fun. That is no more the case. We seem to have forgotten that no matter our tribe or religion, we all carry a green passport. We are all Nigerians! Once you step out of the country and another person is carrying the same passport like you, no one wants to hear that you are from two different tribes or have different religions, you are all the same to them.

I long for the day when things would be just like it was before. Where it doesn’t matter where you come from but what matters is your character. A friend had a Muslim lady as one of her bridesmaids and I was impressed. Not a lot  of people would do that even though they are close to a Muslim friend because of the way things are now. I just wonder what would happen to the next generation if all they see is this attitude we have towards each other. People are so suspicious of each other, we seem to forget that life is not like that, it was never meant to be like that.

I have a friend whose dad is a Muslim and mom is a christian and the girls are Christians and the boys Muslims. I also read a story like that about a former minister (can't remember his name now). I seriously doubt that that can happen now. The Muslims would say never! Christians would say never!! But those families have actually lasted more than some same religion marriages. However like i said it doesn't matter about your religion what matters is your heart and attitude. Love your neighbor as yourself.

I personally think that why we are having all the religious crises and Boko Haram issue is because we are no more tolerating each other. Maybe I am being naïve but having seen what unity was and what it can do, I don’t think I buy into all that has been happening lately. Anywhoo I know that things would change for the better once we all agree to be better.

Anyways like I said on my blackberry page, if I don’t receive meat from all my Muslim peeps this year, next year I am going to steal allllll your rams! Shikena!! Yes! I have vexed!!!

That is all for now guys. I just wanted to wish everyone a happy Eid el Kabir. I am so grateful that i wasn’t on call and was able to ship off my first official booking (and second unofficial), whoop! Whoop!! 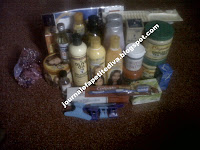 Thanks for reading and for all your comments.
Luv ya,
Petite Diva.