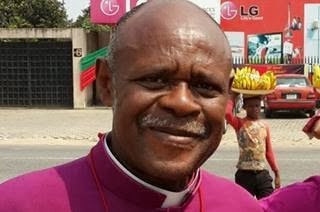 A few weeks ago when i went to church my canon announced that our bishop was very ill and i was shocked. I knew he fell ill last year and was ill for a long time but it was less than 2 weeks when he preached on our covenant sunday and then the canon was announcing that he was dying and i refused to believe it.

I kept on praying throughout the week. I was unable to go to church the next week because i was ill. An illness that came so quickly and is still really strange to me. I have wondered why i fell ill that quickly. So yesterday i was able to go to church and i was expecting good news concerning his health. I noticed that when praises were sung people were not really dancing but since i didn't know anything i didn't think too much about it even when the canon spoke out about people's lack of excitement.

Only for the venerable to mount the pulpit and pray for continuous strength before he began to preach. That was when i knew something was wrong. He preached on the story of the poisonous snakes and the bronze snake that God told Moses to erect so that the people of israel would look up to it when they were bitten (Numbers 21: 4-9). I definitely knew something was wrong. I could not concentrate. I kept waiting for the sentence i knew was coming. RT REVD ISAAC ORAMA, the first bishop i have ever been able to see up close and hear preach for many years was gone! And he finally said it as he was finishing the message. Bishop was gone!

That was it. I became a zombie in church. I kept looking around to see if people were as shocked as i was but i guessed from their expressions that he had died around the time i fell ill so they had gotten used to it a bit. As for me i couldn't function. They asked us to pray for activities of this week and other things, but all i could pray for was for strength.

What knocked me the most was that this was the 3rd elderly man that i knew (not really well but knew to an extent) that has died within 4 weeks. The first was a patient that used to tip me whenever he came to the hospital. He was really nice and sweet to me. I discovered that he was dead about 4 days after he died in Ireland. I had not seen him for a long time, i knew he was travelling abroad but i still decided to call. Only for his wife to pick up and i was like i am from so and so and my name is so and so i would like to speak to him. I explained that i had not seen him for a while, she then told me he had passed on. The first thing that almost came out of my mouth was 'what kind of a joke is that?'. She said he passed on the day before he was to be discharged. I could barely think. She also said that he used to tell about me that was when i almost started crying on the phone, i had to cut the call.

Barely 2 weeks after my former friend who is now my friend again (we are no more that close but we talk anytime we see) called me to his consulting room and said he had bad news. My heart was beating so fast. I asked what, then he said his dad was dead. I didn't know when i started crying in front of him. I was supposed to comfort someone and i was acting like i needed comforting. I had to remember that he was the one who needed comforting and i offered my sympathies in the best way i could.

Now my Bishop is gone. I can't believe it. He is gone, just like that. The venerable said we should not question God but we should look up to him and that he would give us strength to endure. I am still waiting for the strength. My bishop would be buried next week on my birthday, March 4. I was going to try to have a birthday dinner and try to celebrate it a bit since i am turning 30 but i don't think anything matters right now. I am cancelling all my plans and making sure i am where every anglican in Akwa Ibom should be, at the Cathedral of all saints, Uyo to bid my bishop farewell.

He had the smile and laugh that was special. He loved telling stories when he was preaching, that i would start saying 'bishop has started o' but when he was through you would know that the story made sense. I found this article written by someone here, and the person didn't lie at all. He was all that.

Death has had its 3 strike, it is time for it to passover. We would look up and trust the lord for the strength that we need.

I have to go guys, i am crying as i am writing this. I hope i would be able to post this today. Thanks for stopping by.