THIS WORLD AND ALL ITS ADDICTION TO FAKENESS..... 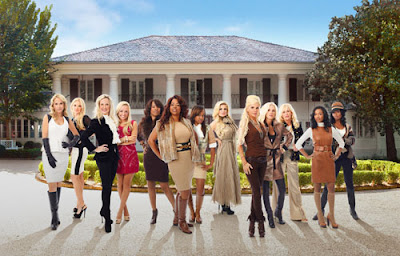 I am presently in Lagos and watching ‘Big rich Atlanta’ and I am astounded with the amount of fakeness in the show. OMG!! Everything is screaming FAKE!! I don’t know if the events that occur are real but it looks all fake to me.

From the blonde hair straight out of the bottle, the super long extensions, the weird talking (I don’t get it but I am sure some people could talk like them), the mask they call make up, the clothes, the drinking, 'the funny air' and the surgically enhanced looks…..arrrgggghhhhh.

Some of the ladies are in my age group and they look like they are older than me by 20 years. I am sure they would look so much different in the mornings without all that make up. But some actually (about 2 black ladies) looked okay to me.

But that is what is on television right now. We are having a lot of fakeness on T.V in the name of reality T.V and because they are fake more like scripted lives being acted in front of the whole world, people are interested in watching them. I won’t say I don’t watch them but at the back of my mind I know that all na fake….pardon my pidgin English. The fakeness is everywhere.

I can’t wait for a real, real reality show where people can show their real faces. A reality show without bleached hair, funny accent, real boobs and not surgically implanted ones, nice fashion sense (some of the dresses they wear are hideous, MY GOODNESS!!). But I am either going to produce it myself or wait till thy Kingdom come because a real reality show would never sell. People want fakeness, however the problem I have is with the impact it has on the younger ones. I wonder if this is what we are introducing them to. I really hope parents are monitoring what they are watching and letting them know that life is more than all the fakeness they see.

I have to say in the episode I watched, the only part I liked was when a black lady was invited to mentor some kids and she told them about her story and how she asked Jesus to come into her life. Apparently she is a preacher (truth be told, I wouldn’t have guessed cos of all she had going on. I guess it is true what they say, ‘never judge a book by its cover’) and had been through a lot. She talked to the inner city kids and invited them to accept Jesus as their Lord and Saviour and encouraged them (in a very hippy way, I must say).

Apart from that, the show was very funny. Oh! I also liked when a snobby white lady wanted to deter the preacher from going to work with the club (where the kids where training in cheer leading stunts) just because they were not rich and the preacher walked away from her. I was really shocked! Like for real! There are still some people like that. I am seriously hoping that she was given a script to act because if she is like that, she is so sick and mean. Who does that? If you have a problem because inner city kids are coming to a gym, you got a major issue but to try and prevent someone from mentoring them because of your biased nature, then I say you are MAJOR SICK!!

Oh well, people are living their lives on television, I am living my life on my blogs…..*justjoking. Hope you guys enjoyed today’s post.

Have a lovely week.
Love ya,
Petite Diva.