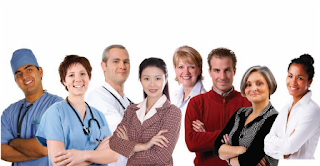 I am a pharmacist (i know y'all know that) and a member of an incredible team called THE HEALTHCARE TEAM and i really love what i am, i love what i do and i love that i can wake up everyday and be a blessing/help to someone. But with my job as with with every job, there are pros and cons. My greatest con is the 'put down i get not from patients but from doctors. I won't even begin to describe all that i have had to endure. It is bad enough that i get flack from patients but for some doctors to treat me horribly, it is not just fair and nice.


I know that I am bound to have disadvantages or should I say 'problems' in  my job but I would love the problems to come from outside my team and not within the team.  When I was in pharmacy school, I rarely had friends in the medical school ‘cos I saw them as a bunch of proud, rude and annoying things who were blessed to have the opportunity to wear a ward coat (my mindset has been changed due to some lovely doctor friends that I have.

It was so bad that I used to tell my friends that I could never date a doctor or marry one (funny I have dated them and my girlfriends are married to doctors). But after leaving school, I began to appreciate doctors and I have so many doctor friends now. However I am not pleased with all of them right now.

We shouldn’t fight each other. We are a team for crying out loud! We are all relevant and unique in our fields. No one is the head and no one is irrelevant. You don’t need to dominate another person’s field to show your superiority. All of us working together would help us to deliver quality healthcare to our patients.

All this bickering and selfishness is totally uncalled for. I think that if we keep fighting and people keep trying to bring another person down, you eventually bring yourself down. Because you would be so consumed with attacking the other person, you won’t see where you are going. I don’t know why this fight is only in Nigeria, maybe it has to do with our warped sense of living. Majority of us believe in bringing people down and love having all the power. I don’t know whether it is all this irrelevant fight or struggle for power that made our healthcare system to be where it is today.

What brought about this post? Recently I heard that due to a legal battle with federal government by other health professionals that was won by the other health workers about salary scale and other benefits, a certain medical association (in simple English, doctors ) has decided to issue a threat or something about their salary scale. I am not even going to bother writing all that was written here but I had to say something. I saw a post by a guy called Wale Anigilaje and even though I am not a sport person, I think it is a perfect illustration of our team.

I hope a lot of my doctor readers read it and I hope you see things the way they really should be. With that said, I am proud of my friends that are doctors and I love you guys so much. I hope things would change soon.

It might not fully change in my lifetime but I hope that it would start to change in my lifetime so that if anyone of my future kids comes up to me and say ‘mum, I want to be a doctor’, I won’t have a horrific expression but would be glad and happy that not only would my child be a fantastic doctor , he or she would be fair and a team player not only to his/her colleagues but also to other team members.

It is important for Nigerian Doctors to realize and appreciate that HEALTHCARE DELIVERY is about a TEAM. A team is ONLY AS STRONG AS ITS WEAKEST LINK...in fact, compare it with a FOOTBALL TEAM, sometimes the CAPTAIN can be the Goal keeper, sometimes a midfielder, another time a striker and most times may be a defender. When the Central defender thinks HE MUST BE THE CAPTAIN at all times, then that is invitation to TROUBLE/that team will never win a trophy....

In the Healthcare team , my opinion is even that (I may be wrong ) the Laboratory Science guys and the Bio-medical Engineers are the midfielders (the engine room ), Once that fail, there would be GUESS WORK, long trust pass to no one in particular.

The team also needs the WINGERS to fly and do the necessary fast breaks, think about the Pharmacist, of course the NURSES LOOKS LIKE THE GOAL KEEPER to me, if a keeper is wounded and you have to use 2nd choice (healthcare assistant, it is not always the best).

Then we have the STRIKERS/Goal POACHERS which I would give the DOCTORS........Sometimes, the Manager/COACH of the team may be a FORMER PLAYER HIMSELF sometimes, they are not...(Think about CMD,health commissioners )...Mourinho and Wenger were never fantastic players if ever they even played but they are one of the Best Manager today, a Lot of fantastic players have failed as coach/Managers..

NHS HOSPITALS manager who reports to BOARD OF GOVERNORS are never Doctors, and the hospitals here are one of the best in the world....Management is about Motivation, leadership, human relations, psychology, financial planning, scale of preference and alternative forgone, allocation of resources, time management and manpower development/recruitment...

It is also about REWARD AND PUNISHMENT without bias....so NIGERIAN DOCTORS need do away with WE ARE THE MOST IMPORTANT MENTALITY IN A TEAM VENTURE.........Please note that I have used the health team and not the MEDICAL or Surgical team.....and of course in my UK examples, let me remind you that Doctors ( the strikers ) are the BEST PAID but THEY CANNOT INSIST ON A PARTICULAR RELATIVITY IN THEIR WAGES to that of others which is the main HEALTH TEAM civil war that has become a vicious circle in Nigeria.

And to all my doctor friends/readers, please don’t think this is a hate post but it is calling a spade, a spade not a spoon. I am not hating on anybody but I believe that enough is enough! We need  to stop all the fighting. We don’t have the time or energy for bickering or putting anyone down, we are too darn busy and too darn principled for that. Let us act according to what we stand for!

Luv always,
Petite Diva.
Written by Petite Diva at 10:47 AM